In the weekend of August 15, 1942, the planning was to make two jumps. At this time during the war the Army used the airborne to conduct demonstration jumps in order to encourage people to purchase (or buy) war bonds. And these jumps were also made to get other guys to volunteer for the paratroops. The idea was to make two jumps with two planeloads at various cities across the country. The first one jump we did was in Charlotte, North Carolina. The last one was scheduled for Massachusetts.

The disaster happened around 20:45 hours according to accounts by someone who lived near the crash site.The two Army C-53 Skytroopers (a variant of the C-47 Skytrain) had left Fort Bragg, North Carolina, earlier that day (Saturday, August 15) and were bound for New England. Accordingly, the plane that crashed was miles from its actual course when it lost its way in a “soupy” fog, something most air corps pilots dreaded. With the destination of Camp Edwards, located near Cape Cod, Massachusetts, the poor visibility caused the two engine plane to brush the treetops of the 2200-foot Garnet Peak which is located in a remote section of the Peru State Forest, Berkshire County. The plane plunged down into the wooded land coming to an abrupt stop on the flats. There was such an impact that the plane cleared a 60-foot trail through the thick of the forest for a distance of about 60 yards, uprooting and cutting a wide swath of large trees in its path. Only two of them survived, although they were badly burned. The rest of them died.

[Extract from ‘From Frying Pan to Mittersill]

On August 13, 2022 there will be the 80th commemoration of the airplane catastrophe with a C-53 airplane at Mt. Garnet in Peru State Forest, Massachusetts that took place on August 15, 1942. 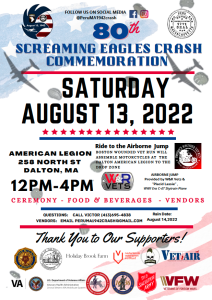